During quarantine, I had the absolute pleasure of interviewing the inspiring and enthusiastic Sara Spicer AKA Lion-S. If you haven’t heard of her but have been to Shambhala Music Festival in Salmo, BC, you’ve definitely marvelled at her work. Lion-S has been an integral part of the magical oasis many of us call home, as stage director and talent booker for “The Living Room Stage”.  With hard work and almost two decades of dedication the Shambhala is a creation from the minds of artists, musicians and true Nelson/Salmo, B.C. locals. Talented, dedicated, and bringing a unique taste to the table, her sets burst with flavour and upbeat variety. This chat was a chance to learn about her love for music and her DJ career spanning since the 90’s while dissecting one of the minds that helped to create one of the most unique festival experiences in the world.

HS: How would you describe the music that you play in your own words?

Lion-S: Well, I’m not genre specific. I love all kinds of music. I am a house head since back in the early 90s. House music was my introduction to the underground dance scene. My tastes evolved from there. When I dj I play what I feel suits the vibe of the dance floor.

“I never thought I’d ever become a DJ, but I was an avid dancer. Those are my roots, then I kind of discovered the underground dance culture. That is probably what helped me let go and realize there’s more freedom in this, I really found it was a whole other world.”

And then I learned, I really love all kinds of global music and I love bass. I love very tasteful warm lush down tempo rhythmic grooves. I love the chiller side of music. I also love to dance. So it really depends on whatever the gig is, I can totally adapt. HS: What is the story behind Lion-S?

Lion-S: The short story: I was a closet dj in Nelson for a short couple years, and then ended up on the east coast in Halifax, Nova Scotia. I opened a record store there in 90’s, I believe 1998. I also began promoting events with my ‘now husband’ Hoola. We brought artist friends like Vinyl Richie to play. When he walked into my record store he goes: “Sara You look like a lioness” because my hair was dreading. He hadn’t seen me in a couple years. Around the same time, in 1998 was the first time someone walked in and said, “Hey, will you DJ at this party?” I never thought I would be a DJ but I had a record store and my collection was growing so I said yes.  I needed to come up with a name and Scott Arkwall aka Vinyl Ritchie bassically inspired Lion-S

HS: What happened after your first gig?

Lion-S: It was pretty nerve wracking going back in 1999, I ended up making the decision to close the store down, because we missed Nelson so much.

“I was there [Halifax] two years but I remember getting back to Nelson right in time for Shambhala year two, and we DJ’d in the Fractal Forest. I was pretty nervous.  Some artists that influenced me during this time were: Mark Farina, Doc Martin, Jeno, Garth, Vinyl Ritchie”

After year three, the owner of the festival Jimmy approached us and said hey, would you like to book the festival? We felt like it was time. We were wanting to contribute and help out and so from year 4 to year 10 We did all the bookings and programming for every stage of the festival. If you can imagine it grew to become a pretty big job so we naturally stepped down from that and decided to focus on putting all our love into the living room. The following 10 years it evolved into like this huge thing with a whole team of us working magic together.

Lion-S: The biggest Living room stage highlight for me was bringing the Orb to Shambhala. They are a big part of my early influences. It was an honour to host them. Some other artists we hosted were Sabo, KMLN, Marques Wyatt, Dirtwire, Z-trip, and Niki Sadeki. 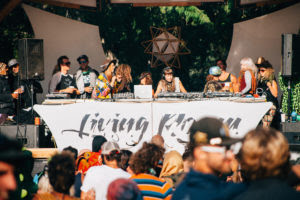 Lion-S: We acknowledge the cultural diversity of the music that forms the foundation of our events and wish to show our support for communities which are struggling for the respect and recognition they deserve. We are doing big work.

We’ve been saving this article for the perfect moment, and the perfect moment is now, seeing that LION-S will be performing her Livestream tomorrow on Shambhala At Home. Click the link, have a listen and enjoy her groovy sounds. A great start to the long weekend.

It was a pleasure talking with Lion-S and discussing her journey through one of the most exciting and loving festivals in the world. The amount of people who pilgrimage to the farm and call it home, just goes to show how important Lion-S’s work is. As she is always creating and sharing her art, her new down tempo/chill project is called Nür Tür and you can listen to it HERE.

If you are looking for some badass women DJ’ing together as Meowmix, below is their annual Living Room Set.