Let us take you back a couple weeks, to the ever-impressive indoor and outdoor venues where Montreal Jazz Festival flourishes. The festival continues to highlight stellar local and international talent, taking Montrealers on a deliciously musical summer ride. The 39th edition, didn’t disappoint – here’s a recap of several shows our team was lucky to attend, along with our !!! (Chk Chk Chk) interview. Until next year!

A seat to see two time Grammy Award winner Cecile McLorin Salvant open the Montreal International Jazz Fest can be considered a blessing by the Jazz Gods. The crowd was blown away into bits following her delicate yet soul shaking performance. Her range of musical influences complemented by her unconventional style was everything I could imagine for a show of this caliber.

Jazz journalist Fred Kaplan, who profiled Salvant in The New Yorker, addresses her masterly grasp on exhibiting a wide emotional range in her music. “Her blues are blue. Her swings swing (…) She has vast, almost operatic range.” He also evokes how Salvant digs into a lyric like an actress: “She finds things in a lyric that other jazz singers kind of glide by,”

The show was preceded by a wonderful performance by Christian Sands. The band members’ fingers felt as if they were floating in mid-air while bursting with eloquent sounds, positively wowing the crowd. Metronomy’s good-natured sound has been making friends dance together for a while now, ripe with an indie pop identity and modern disco melodies. With a typically British charismatically kooky stage presence, they turned a packed MTelus into a thriving dance party.

The band kicked things off in great energy, bouncing off the groovy guitar and 80s synth that have kept The Bay on people’s mind and ears for the past seven years. They said a few words in French to an excited crowd, before breaking out onto rumbling drum/guitar funk-pop arrangements backed by effervescent smoke and red lights lining the bottom of stage. The show reflected their music: energetic, fun, original.

Metronomy gives the impression of just being a group of friends jamming, with keyboardists dancing together, band members smiling at each other, and everyone’s visible fun of being on stage.
« Vous restez hyper cool » were singer Joseph Mount’s closing words. Right back at you, man.

Lucioles: The Dark Side of the Moon – June 30th, 5ème Salle

Attending this rendition of Dark Side of the Moon was a mesmerizing moment, deeply breathing to the clear acoustics of Place des Art’s Cinquième Salle. The dimly-lit intimate walls of the room welcomed Luciole’s eight member band’s jazz arrangements of a timeless work. Dark Side of the Moon revolutionized the concept album, prog rock and psychedelia among others, through transcending storytelling that inhabits all moving parts of a work, from sonic imagery to themes embedded into lyrics, processed sounds and albums artwork. 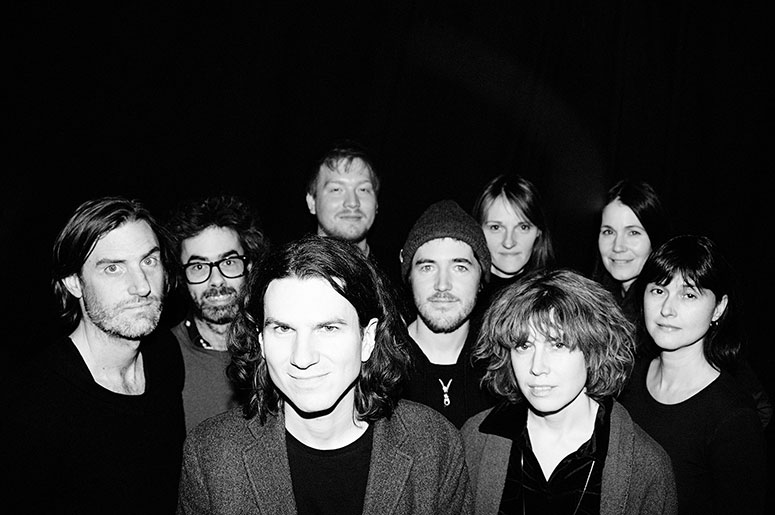 Under the expertise of the wonderful piano lead Guillaume Martineau, Luciole’s interpretation was articulate, rich, experimental and dazzling. The full band, consisting of piano, violin, cello, lead vocals, lead guitar, bass guitar, drums and xylophone, danced across Pink Floyd’s mythical masterpiece, peppering it with their own interpretation but never straying too far from its soul.

Musically, it was a perfect recipe: the juxtaposition of a psychedelic rock base and jazz arrangements with a gliding experimental piano, a booming cello, undulating vocals, accelerated Afro-Cuban jazzy tempos, long-winded intros and layered instrumental constructions, all working together to preserve an enigmatic, melancholic at times joyful and at times eery tone.

Its by exploring projects like this that artists bring to light musical connecting threads across genres. The jazz interpretation ultimately highlighted the fundamental blues beating heart of Dark Side of the Moon… Memorable.

I’ve seen Bonobo playing multiple times, but I’ve never got the chance to listen to his band play live. Their performance at Montreal Jazz Fest absolutely blew my mind. The acoustic at Salle Wilfried-Pelletier made Simon Green’s music resonate through our souls. The British DJ brought the whole instrumental and vocal wealth of his collective to his loyal fanbase who stayed in owe for over 2 hours. Szjerdene, the lead singer of his 2018 live tour, embarked the audience on a beautiful journey through the realms of electronic music and beyond. Migration, Bonobo’s newest work, is an ode to the migratory life he’s led for the past few years and how he now understands humanity. Simon Green is as talented at being a DJ as he is at being a musician, he’s one of those rare artists I would never stop following.